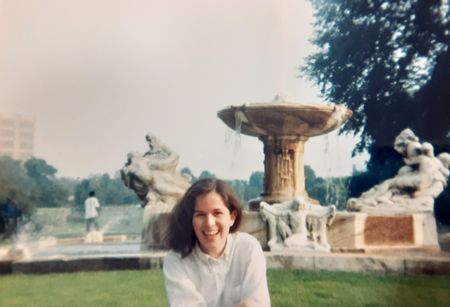 CLEVELAND, Ohio – Eman Quotah’s debut novel “Bride of the Sea” is set in Cleveland Heights as well as in Jiddah, a Saudi Arabian port city – and reflects the author’s own childhood.

Quotah currently lives and works in Washington, DC. During much of her early life and teenage years, she divided time between two continents.

When she was three or four years old, Quotah moved to Northeast Ohio with her parents, who were studying at Case Western Reserve University. While in first grade at Shaker Heights public school, she discovered a passion for writing. Quotah and her family then lived in Jiddah in the 80s and 90s but spent the summers in Cleveland Heights.

“People outside of Ohio or Saudi Arabia would laugh if we said we had summer in Cleveland, but Cleveland Heights was actually a great place to be for the summer,” Quotah said in a phone interview with cleveland.com.

These experiences are reflected in the vivid descriptions and details of the “Bride of the Sea”. But the plot of the novel comes from another source; Quotah said she was inspired by a friend in the family’s experience of kidnapping parenting children, and that the child eventually reunited with her father and half of the family.

“Bride of the Sea” was released on January 26th Tin House books.

The plot of “Bride of the Sea” was adapted and presented by Quotah from three different perspectives: a mother, Saeedah; a father, Muneer; and a daughter, Hanadi.

After Saeedah and Hanadi disappeared from the family home in Cleveland Heights, Muneer spent years trying to find his daughter. Eventually he reconnects with her and brings her to his half of the family in Jiddah.

Through the change of perspective between the three main characters, “Bride of the Sea” shows how Saeedah’s decision affects everyone around her, especially the traumatic effects on Hanadi.

“Writing the character of Saeedah – she was the hardest part for me. She’s making a decision that I hope I never feel like I have to make, ”said Quotah. “It’s a damaging choice she’s making. It was really hard to get into her head and portray her with complexity and nuance. “

The story focuses on Hanadi’s difficulties growing up after her abduction and what it is like to learn about her father’s culture after being reunited with him.

“I imagined this person who grew up in the United States and is now being introduced to a parent from another country,” Quotah said. “I grew up in both countries, so I almost imagined that I didn’t have half of my upbringing.”

Quotah grew up as a Muslim and attended a Muslim school in Jiddah. The summers in northeast Ohio were different. Quotah often went to the movies and learned to drive – activities she couldn’t do in Saudi Arabia. At that time, cinemas were banned and women were not allowed to drive in the country. (In 2018 both bans were raised.)

“[Cleveland and Jiddah] are very different, but I think I have the ability to see the nuances and the good and bad of different places because I lived in two different places when I was a kid, “she said. “It was a different kind of childhood than many people, but on the flip side, there are a lot of people who go the other way: Their families are immigrants to the US and they spend the summers abroad, so I got the hang of it. ”

Quotah hopes “Bride of the Sea” represents both Jiddah and Cleveland well.

“It was just as important to me to write the Cleveland attitude well and Shaker Heights well – that was just as important to me as writing the Saudi attitude well,” said Quotah. “Instead of seeing these two places as completely different and ‘never going to meet,’ I had to balance it out as a kid by keeping these two very different, yet in some ways very similar cultures within me. Maybe readers can get a bit of that feeling for what it is. “

“Bride of the Sea” can be ordered from local bookstores or from the Tin House website. tinhouse.com.

To promote their new book, Quotah is slated for a virtual event at the Cuyahoga County Public Library on June 8 with three Ohio authors. More information about the upcoming event Here.

Cease the Violence march, prayer stroll to be held in Youngstown