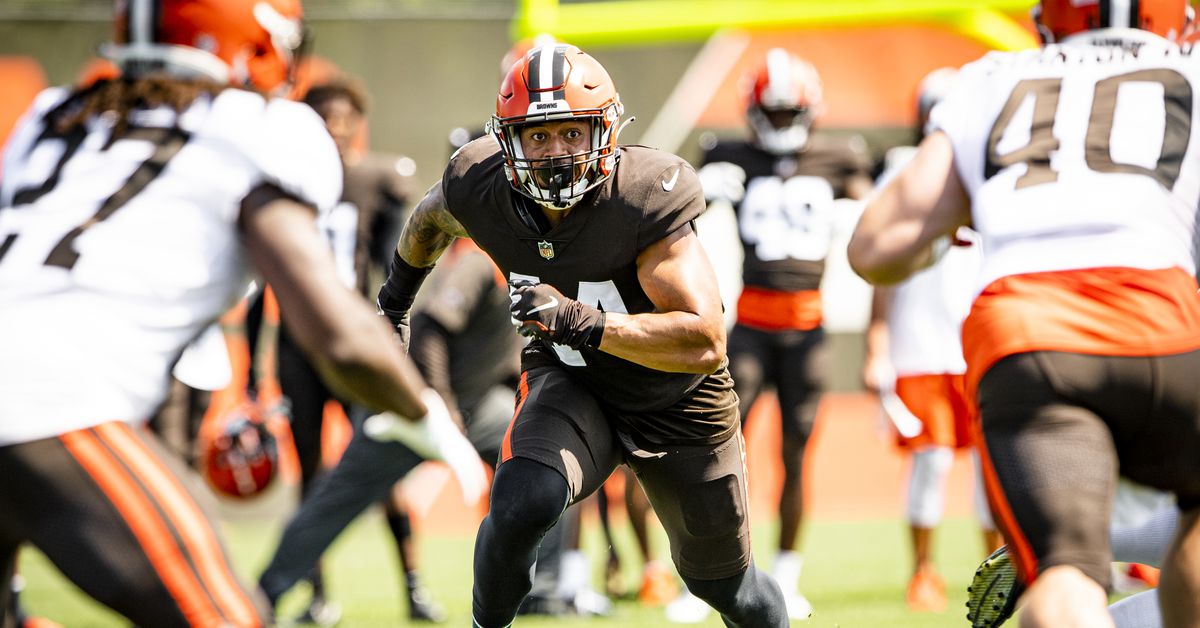 1. First day in pads: Although the players didn’t hit hard in the pads, Tuesday’s workout was the first padded workout of the 2021 campaign. An example of something else you’ve seen with the pads are running backs and tight ends that take on more realistic pass blocking Exercises work:

2. JOK debuts while Walker is seated: During yesterday’s training, LB Anthony Walker suffered a knee injury but they say he will miss “a week or more“Action. If there is ever a silver lining, today was Rookie LB’s debut Jeremiah Owusu-Koramoahwho started the camp on the Reserve / COVID-19 list. Walker’s absence numbers mean more opportunities for JOK to update itself. On Tuesday he only did one-on-one exercises.

3rd drill of the day: LB Jadeveon Clowney continued to win matchups against the Browns’ Right Tackles on Tuesday and garnered rave reviews from multiple reporters. The clip below obviously doesn’t show that, but our Drill of the Day shows Clowney in honor of his outstanding game.

Jake Trotter from ESPN joked that Clowney had 20 sacks today of the number of times he was in the backcourt at each game.

4. Mayfield continues his groove: For the most part, QB Baker Mayfield keeps throwing the ball well to his receivers in this camp. We have several pieces to show, starting with this anticipation in a narrow window to WR Donovan Peoples-Jones against CB Denzel Ward:

And then, here is CB Brian Allen be beaten in an out-and-up by WR KhaDarel Hodge:

5. Kickers stay constant: There are two table footballers in the camp, but the question is, is that? Cody Parkey be the favorite and Chase McLaughlin just your match kicker in camp, or is this a real fight between the two of them? Both were still in their game on Tuesday, each scoring 5 out of 5 of their attempts

6. A bit of frustration: While Mayfield was previously in a groove, he was reportedly frustrated with his lack of success on 7v7 drilling in the red zone. When they got to the team practice (11v11), Mayfield found TE Austin Hooper for a touchdown:

Baker Mayfield said, “I don’t think those who made a damn pass in 7v7 mode. Damn ridiculous. “

A little later, however, the defense continued its dynamic as LB. away Mack Wilson athletically intercepted a pass intended for TE David Njoku:

7. No Nothing for Walkthroughs: Two funny nuggets from ESPN’s Jake Trotter: Before training, the Browns do their walkthroughs barefoot; and during practice, one of the team’s two drones (to take footage) hit a branch and fell to the ground.

8. Brownies: DT Sheldon day had at least a few reps with the defense of the first team. … RB Tre Harbison was evacuated during exercise and has a concussion. … Due to injury or rest, p Jovante Moffatt and LB Jacob Phillips were with the defense of the first team. … TE Stephen Carlson is on the way to catching passports against backup defenders. … RB John Kelly had multiple touchdowns. … C JC Tretter was back after missing the practice on Monday with an illness. … CB Robert Jackson missed practice with an illness. … A total of 22 puppies were adopted at the Browns Puppy Pound’s training camp this year.

9. Next: The Browns will be back on the practice field at 2:25 p.m. on Wednesday before having a day off on Thursday.

Police in search of 12-year-old lady lacking from Cleveland