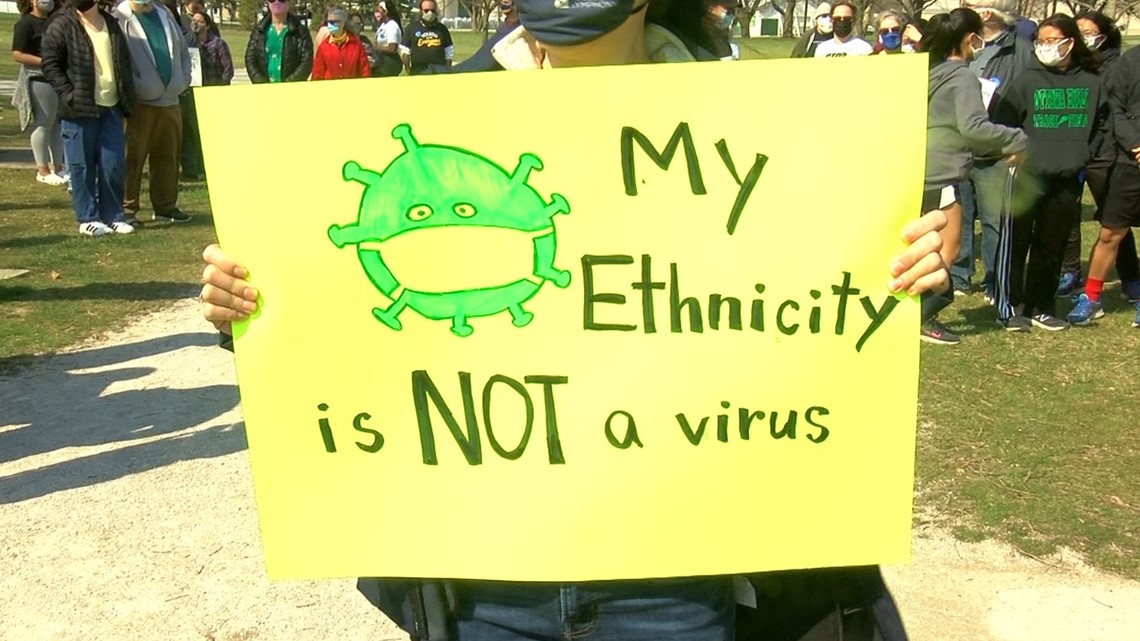 The Perrysburg Coalition for Inclusion and Social Justice hosted the event in Woodlands Park to demonstrate support for the Asian community in the area.

PERRYSBURG, Ohio – The community is standing up against recent anti-Asian attacks across the country.

Dozens gathered at Woodlands Park in Perrysburg to discuss the problem and remember those lost in the Atlanta mass shootings last month.

Many from the Asian community in Toledo spoke at the rally. They say recent events made them nervous.

“Just the color of my skin, people can roll down their windows and yell at me for no reason,” said Amy Chang, who lives in Toledo.

That’s just her experience as an Asian woman in Toledo. The Perrysburg Stop the Asian Hate event is happening as anti-Asian incidents rise across the country, including the Atlanta shooting that killed eight people, including six Asian women.

“We’re getting up,” said Jolie Sheffer. “We do not allow our silence to be perceived as complicity.”

Sheffer, chairman of the Perrysburg Coalition for Inclusion and Social Justice, says her group put the event together to show support for the Asian community that may be fearful right now.

“When events take place elsewhere, we know they are taking place here, too,” Sheffer said. “You can be less visible.”

Take, for example, what happened to Chang, who came to the rally to show support.

“My daughter and I were walking on McCord Road and someone actually rolled down the window and barked at us,” she said.

Chang says she lived in Toledo for 25 years and that nothing like this has ever happened to her.

“For the first time, I was shaken to the core,” she added.

Leon Wang is part of the Asian Student Union at Bowling Green State University. He recited a poem he wrote for the event that read, “My skin is yellow, our hearts are blue, I have a dream that people of all colors will see us as human beings.”

He says there are certain sexual and cultural stereotypes against his community. And recent events are affecting them.

“It creates a fear that keeps me from doing everyday things that I want to do,” he said.

According to Sheffer, new idioms in our society such as the “Chinese virus” used to describe the coronavirus have only made the situation worse.

“In the past few years we’ve seen great national leaders scapegoating Asians for everything from coronavirus to economic problems,” she said.

Chang believes that this type of language was inconsiderate for her community.

“I think it’s dangerous,” she added, “and I don’t think it’s a good idea for our next generation to testify. We need to learn how to show love to the people in our community.”

The coalition is planning further events to further raise awareness of this issue.