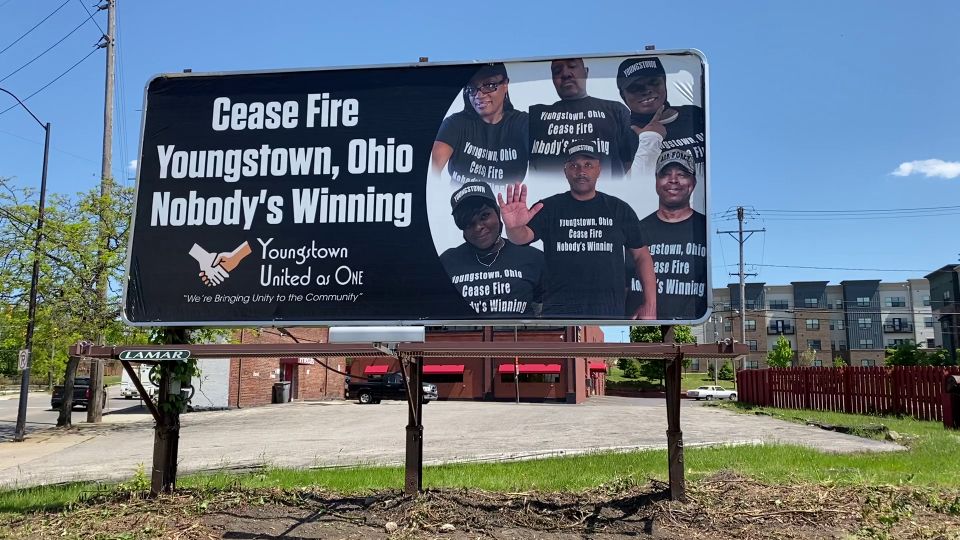 The first billboard was placed on Belmont and West Rayen Streets

YOUNGSTOWN, Ohio (WKBN) – Whenever Darrell Jones wondered what the reaction would be to his group Youngstown United As One’s anti-violence billboards, he got a hint shortly after it first appeared on Friday morning.

The first billboard was placed on Belmont and West Rayen Streets.

When Jones, the group’s president, and two other members below were gathered, a worker came out of a shop across the street, looked over, and applauded.

The response was positive for 57 year old Jones, who is from the North Side, grew up in Smoky Hollow and graduated from Rayen School.

The group has held fundraisers and food drives in the past to help the homeless. However, this year Jones said they will also bring an anti-violence message to this work.

“It’s getting out of hand,” said Jones, who is a security guard. “It seems to get worse every year.”

The group previously held a Stop The Violence event at the Boys and Girls Club on Oak Hill Avenue, where relatives of people killed by violence shared their stories in hopes of deterring others from participating in acts of violence.

The billboards are a visual component of that, Jones said. Another billboard is due to go off on lower Market Street on Monday.

People see them because they are on main roads they use every day, Jones said. He hopes the repetition of seeing them every day will help sink the message that violence doesn’t solve problems.

“It’s the ultimate way to get the message across,” said Jones.

“The only time people got together was for sad occasions,” said Jones.

Two other members of the group are also Rayen alumni. Secretary Tineka Patterson says she volunteered for a year to see if the group’s mission suited her. It does. She is now studying social work at Eastern Gateway Community College because she saw the need when she volunteered for Youngstown United.

“I’ve seen what Youngstown needs to help the homeless and the community,” Patterson said.

Treasurer Laura Greene is a classmate of Jones and got involved because she knows him, she said.

The billboards cost $ 650 and were paid for through fundraisers and also by group members. They will be operational for 28 days, Jones said.

Cleveland Browns Coaching Camp Recap: Day 6 – The Pads are On

Why it is smart for Cleveland Browns, OBJ to renegotiate his contract