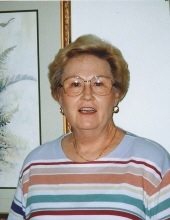 Barbara Jean Houser, 89, passed away peacefully on Tuesday January 19, 2021 at her home surrounded by her family.

She was a loving mother, grandmother, and great-grandmother. She loved spending time with her family and friends. Her neighbors called her the “Plant Lady” because she loved to garden and work in her flowers. She loved to travel whenever she could. One of her favorite things to do was sit outside on her screened porch. She was a member of the First Baptist Church in Cleveland and always enjoyed attending her Sunday school class before she fell ill.

Her parents, Gene and Lucille, from Knoxville, had preceded her death. her 46 year old husband, Robert “Bob” Houser; and brother Thomas Finger of Lenoir City.

We would particularly like to thank their hospice nurses Shannon, Stephanie and Chaplain Doug of the Chattanooga Hospice for their love, care and support during their final days.

The family will have a private funeral service.

Share a memory of Barbara with your family and / or your personal condolences by visiting her memorial website and guest book at www.companionfunerals.com.

Companion Funeral Home is honored to support their family with these arrangements.

Youngstown man will get over 19 years for rape | Information, Sports activities, Jobs