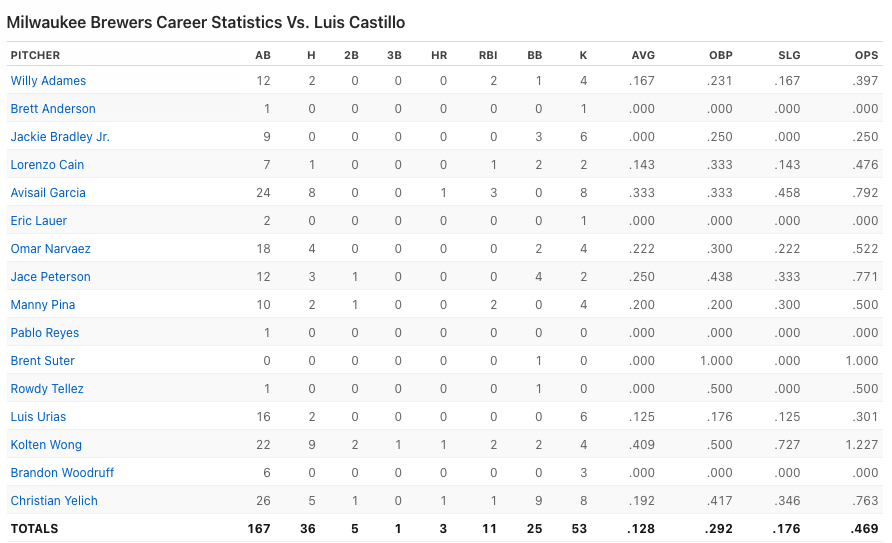 The Cincinnati Reds (69-58) will attempt to recover from a painful lead over the Milwaukee Brewers (77-49) at 8:10 pm tonight. The Reds play 8.5 games back in NL Central on Wednesday. The Reds still hold the NL’s second wildcard place with a lead of 1.0 as the Padres lost again last night. The Padres lost 10 out of 12.

Luis CastilloThe last two starts have been great (13.2 IP, 4 R, 3 BB, 15 K). Castillo had a bad start in Cleveland, but has otherwise been a completely dominant SP since the beginning of June with 2.73 ERA. Castillo has a 3.26 ERA in 16 career starts against the Brewers (2.79 ERA in 5 starts this season).

Brandon Woodruff got his worst start to the season against the Cardinals: 5.0 IP, 8 H, 6 ER, 2 HR. Overall, however, like his teammate Corbin Burnes yesterday, Woodruff is seriously considered for the NL Cy Young. Woodruff’s numbers have been steadily improving over the past 3 seasons. He has a career of 3.45 ERA in 8 starts against the Reds (1.54 ERA in 2 starts this season).

David Bell says Jesse is rehabilitating Winker in Cincinnati. “No baseball, no swinging or anything like that yet.”

“A few more weeks away.”

David Bell says there will be a lot more information on Tejay Antone “the next day or so.”

The Reds’ chances of winning NL Central are a very meager 1.6%, according to Fangraphs. The Reds really have to win those next two games to stand a chance should the Brewers wear off quickly. After a Brewers breakdown, these games really are no more important than the upcoming Reds against the Marlins, Cubs, Pirates or Tigers. The Reds just need to find a way to win as many games as the Padres the rest of the way. Go reds!