CLEVELAND, Ohio – Dinosaurs that once shook the earth are about to break out of the windowless galleries that occupy them deep inside Cleveland Museum of Natural History.

Recent plans for an expansion and renovation worth $ 150 million show that the fossilized skeleton is 70 feet in length Haplocanthosaurus delfsi, known as “Happy,” will stride through a large, new light-flooded lobby near Wade Oval in University Circle.

Remains of the Dunkleosteus terrelli, a terrifying shark-like creature recently dubbed the Fossil Fish of Ohio, appears to be swimming overhead.

And a glassy new exhibition wing becomes the fossilized remains of one Tyrannosaurus Rex visible from Wade Oval through a large window, day and night.

“We use natural light and bring in all of the views from Wade Oval. When a visitor is inside, they feel connected to the outside and the natural world,” said Patrick Gallagher, director and president of Gallagher & Associates, based in Bethesda , Maryland, the company that designs the museum’s new exhibits.

Gallagher and others who worked on the project gave a first look at the new exhibition designs cleveland.com and The Plain Dealer, just before an important meeting of the city’s planning committee scheduled for Friday, February 5th.

At this meeting, the museum will seek final approval for the design of its building, an important step required for a building permit. The facility plans to start construction next summer and be ready by summer 2024.

The next phase of work will be the largest and most ambitious in a multi-phase redesign since 2012. The floor plan of the museum is torn open and 55,000 square meters of exhibition space is turned over in a way that dramatically changes and feels the appearance of the museum.

The Cleveland Museum of Natural History recently cut staff due to the coronavirus pandemic and the resulting economic downturn.Steven Litt, The Plain Dealer

Founded in 1920, the museum moved to University Circle in the 1950s, where its complex expanded tenfold with architecturally nondescript additions that made the institution appear dark, confusing, and even uninviting. That’s going to change.

Entomologist Gavin Svenson, the museum’s director of research and collections, said he would do away with galleries and dioramas organized in a presentation style that he believed dates back to the Victorian era.

Instead of a clockwise cycle tracing a chronological journey from star formation to dinosaurs and human evolution, the museum will divide exhibits into two main areas called planetary processes and biological processes.

Planetary Processes will be housed in a glassy new wing that will replace the parking lot north of the main entrance to the museum and west of Wade Oval Drive.

The new wing will also flank the museum’s Shafran Planetarium, which was housed in a conical, copper-colored tower in 2002.

The museum thinks it makes sense to put planetary processes next to the planetarium instead of leaving it on the other side of the exhibition layout, where exhibits on stars, planets, and geology are now.

The “Biological Processes” exhibition will again occupy the current location of the geoscientific exhibits on the south side of the museum complex next to the Ralph Perkins II Wildlife Center & Woods Garden, completed in 2016, where this new neighborhood would make a lot more sense.

The Planetary Processes exhibit area, proposed by the Maryland-based exhibit designers at Gallagher & Associates for the Cleveland Museum of Natural History, will feature displays that tell visitors that their bodies are literally made of stardust – elements on the periodic table that supernova’s billions of people have years after the big bang.Cleveland Museum of Natural History

Both new exhibition areas will offer large open spaces and long vistas with displays on freestanding platforms for visitors to walk around rather than past the past.

Designers use special lighting to highlight objects, as well as digital media, traditional text boxes, and other methods, and to engage visitors with different interests and learning styles.

The exhibition areas will be littered with educational spaces where visitors can watch scientists at work, talk to curators, get involved in practical projects, or use interactive displays triggered by physical gestures.

“It will feel a lot more like traveling through moments around you than walking into a room and following the four walls,” said Gallagher. “We want to overcome this barrier that museums are big, black boxes that we fill.”

The exhibition areas are connected by a new, 7000 square meter central visitor hall, which is accessible from both Wade Oval and the museum’s parking garage, which was completed in 2016 and has 300 spaces. On the way they meet “Happy”, the dinosaur, in his new excavation.

The new work will follow earlier stages of the museum’s expansion and renovation, which included the garage, wildlife center, and the $ 8.9 million “Gateway” projects completed in December.

Gateway projects included redesigning the open-air courtyard by Thelma and Kent H. Smith at the heart of the museum, renovating the 450-seat Murch Auditorium and redesigning part of its main library as the new “Current” of the museum’s science area. 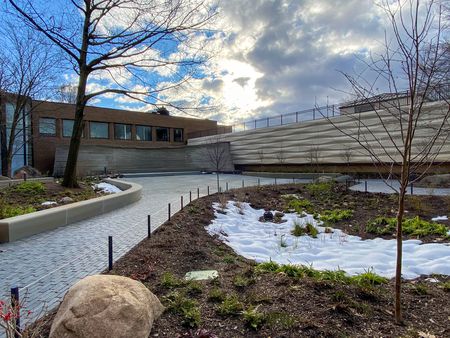 The new exhibits are from the DLR Group | Occupy designed architectural spaces Cleveland, formerly Westlake Reed Leskosky, will dramatically change the appearance of the museum inside and out.

The Planetary Processes exhibition wing, a new cafe extension, and a redesigned main entrance will flank the Shafran planetarium with glass-enclosed rooms surmounted by a curved, snow-white roof designed to commemorate the glaciers that span much of Ohio to the End of the last ice-covered age about 11,600 years ago.

The DLR design follows an earlier proposal for a 110,000-square-foot extension designed by Denver-based Fentress Architects that resembled a piece of a mountain with fault blocks. The museum realized that this was prohibitive and not well connected with the sense of place in Northeast Ohio.

The museum, which currently exhibits around 4,000 objects from its collection of more than 5 million copies, plans to show roughly the same amount after the renovation.

Classic items like “Lucy,” the partial skeleton of a 3.2 million year old human ancestor, and Balto, the taxidermal remains of the famous husky who led the final leg of the life-saving serum run to Nome, Alaska in 1925, will enjoy the pride of the place. So does the museum’s large pendulum.

According to Sonia Winner, President and CEO of the museum, “Steggie,” the popular outdoor stegosaurus sculpture, will remain in its current location on Wade Oval Drive. 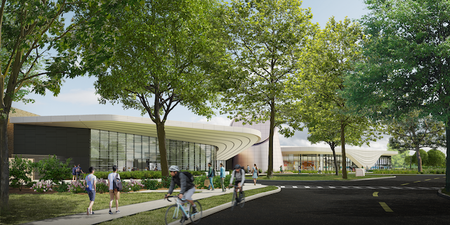 The new landscaping around the museum, designed by Sasaki from Boston and Pashek + MTR from Pittsburgh, will be reminiscent of the surroundings of a glacial moraine with plants from northeast Ohio.

Future phases of work taking place after 2024 will include the renovation of storage, research and education rooms on floors below the main exhibition areas. The museum will also use the Kirtland Hall, which now houses the dinosaur collection, as a new traveling exhibition space.

Light as a metaphor

In the broadest sense, the new architecture and exhibits at the Gallagher Museum will use light and transparency as metaphors for the critical importance of science, facts and free exploration.

These concepts may sound controversial to some after four years of then-President Donald Trump joking about the coronavirus pandemic and mocking the consensus on climate change.

However, the museum’s staff, designers, and board members say they are simply sticking to their mission – one that they think is more relevant than ever.

“There has been a pretty significant attack on science in the past four years,” said James Hambrick, vice president of the museum’s board of directors and past president, CEO and chairman of Lubrizol in Wickliffe.

“Our museum tries to provide a truly modern and extraordinary way to reach people about the planet and our connection to it and our meaning to it,” said Hambrick.