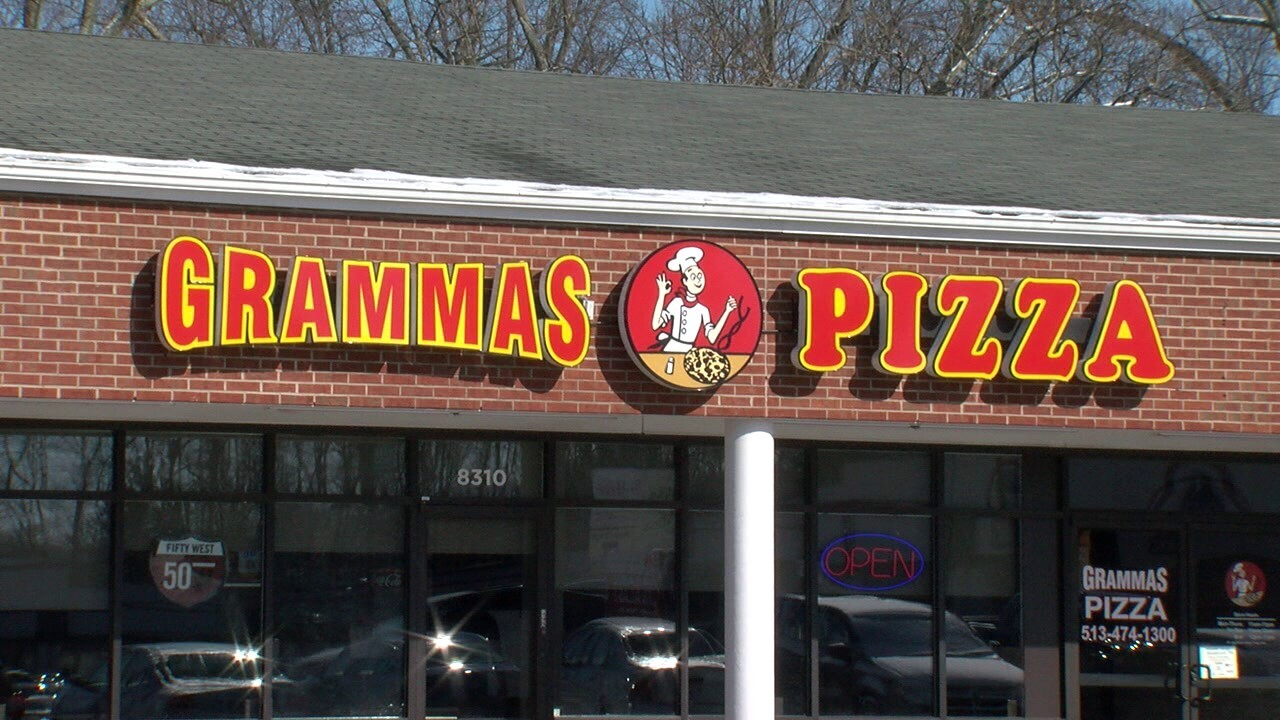 CINCINNATI — Joe Kendall spent more than $100,000 last year to keep the coronavirus from attacking his business. But he couldn’t keep the virus from invading his own body.

“I tested positive Dec. 28,” said Kendall, co-owner of Silver Spring House restaurant in Symmes Township. “I had chills and a cough and terrible headaches.”

The restaurant ranked first in an I-Team list of 2,927 businesses that faced similar complaints. The I-Team compiled the list with public records from government agencies that enforced Ohio Health Department orders.

Because his symptoms began five days after he started a year-end vacation, Kendall said he doesn’t believe he caught the disease at work.

But he isn’t as certain about a couple hospitalized by COVID-19 after dining at Silver Spring House Nov. 28.

“Within three days, we started to experience COVID symptoms,” Denise Evans wrote in a Dec. 22 complaint to Hamilton County. “My husband was in the hospital for eight days.”

Evans declined to be interviewed for this story but confirmed the facts alleged in her complaint and told the I-Team she believes she caught the virus at Silver Spring House. The health department has “no way of knowing” if the infection happened there, spokesman Mike Samet said.

“I would feel badly if she did get it here,” Kendall said. “But do I feel responsible? I don’t know. I don’t think I’m responsible. I mean, we do the protocols we’re supposed to do.”

See no evil, cite no evil

Those are just a few of the COVID-19 dilemmas you’ll find in the I-Team’s searchable database of 4,097 complaints to public health officials. The I-Team analyzed the records to see how effective agencies are at spotting and correcting behaviors that violate state orders. The analysis shows less than 2% of all complaints led to a notice of violation and nearly 60% of those notices were followed by more complaints.

“In order for us to pursue violations, we must witness the alleged violations,” Samet wrote in a one-page response to the I-Team’s questions. “The Ohio Department of Health Director’s Orders do not give a local health department enforcement rights against a business. As a county public health agency, our ability to enforce against individuals is minimal and would require an individual to be cited to court for a judge to determine if a violation exists. In all cases, we acted as forcefully as we were able.”

The I-Team requested complaint data from eight local health departments as part of WCPO’s annual “Dirty Dining” coverage of food-safety violations. Warren and Hamilton counties supplied the most records, which were supplemented by complaint and enforcement data from the Ohio Highway Patrol, Ohio Liquor Control Commission and Ohio Bureau of Workers Compensation.

“The first step in nearly all encounters is to work with the facility to educate them about compliance with rules,” Samet wrote. “Further complaints can result in subsequent visits, notices of violation, and/or referral to the prosecutor for further dispensation.”

The Warren County Health District received 900 complaints through Jan. 27. It issued one notice of violation, two referrals to Ohio Liquor Control and sent nine cases to Warren County’s prosecutor for further guidance. Warren County Prosecutor David Fornshell said his office took no civil or criminal action in any of the health district referrals.

“Due to the volume of calls and complaints we have received during the pandemic the health district issues a notice that a complaint is received that indicates which measure was alleged to not be in compliance,” wrote Chris Balster, Warren County’s director of environmental health, in an email to the I-Team. “For facilities that receive numerous complaints, we have attempted to follow up with on-site investigations.”

In November, local health departments began referring complaints involving retailers to the Ohio Retail Compliance Unit, which is part of the Bureau of Workers Compensation. Its records indicate 278 cases from Hamilton, Warren, Butler and Clermont counties through Jan. 4, with nine warnings issued.

Here is a summary of businesses that ranked in the top 10 and what the I-Team learned about enforcement actions flowing from those complaints:

Grammas Pizza at 8310 Beechmont Ave. in Anderson Township had 16 complaints about employees not wearing masks between May 26 and Oct. 23. The case was referred to the Hamilton County Prosecutor after the 10th complaint on Aug. 19.

“We were not looking to prosecute people for these violations,” said Amy Clausing, public information officer for the prosecutor’s office. “The Health Department looks into the situation and gets a plan from the entity.”

Records show the restaurant claimed an exemption for kitchen employees because of the heat generated by its pizza oven. Customers complained nonkitchen employees, including delivery drivers and a cashier, also failed to wear masks.

The most recent complaint in October alleged employees were “still not wearing masks and they’re not washing their hands touching people’s food and there was person in there coughing.” An inspector noted Oct. 26 that a kitchen employee was wearing a mask, while a driver without a mask “was reported to have an exemption.”

The restaurant did not respond to the I-Team’s calls. 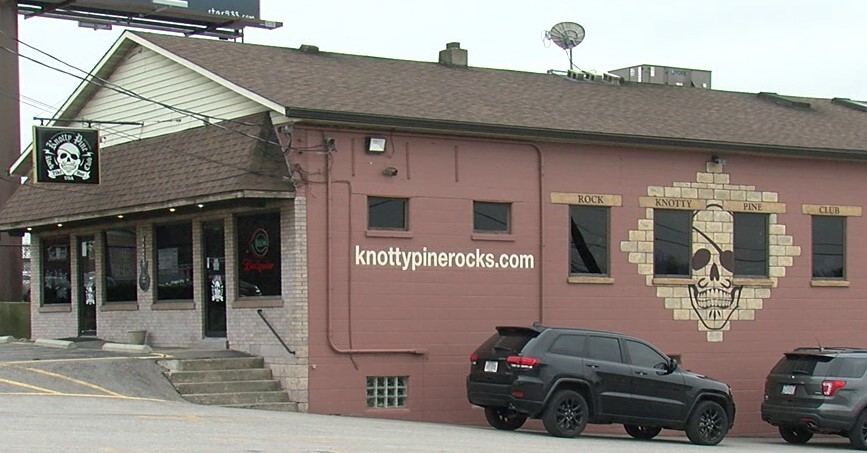 Live music and outdoor volleyball are summer staples at the Knotty Pine.

The Knotty Pine Rock Club & Tiki Bar at 6947 Cheviot Road in Colerain Township had 19 complaints between May 18 and Dec. 3, including a July 29 allegation that the bar booked a band with “several” COVID-positive musicians. The complaints led to three visits by the Ohio Investigative Unit. Lt. Craig Cvetan said investigators found no violations on Aug. 1, Sept. 17 and Oct. 16.

Co-owner Cole Weddle was surprised to learn liquor enforcement agents visited his family-owned bar but not that it passed muster.

“Our bar is tremendously safe,” Weddle said. “Our employees are masked. We pass out masks at the front door. The room is set up every day for social distancing.”

And one more metric: Knotty Pine has about 20 employees, none of them have tested positive for the virus nearly one year into the pandemic.

“I don’t want to say anything that’s going to jinx us, but it speaks for itself,” he said. “We’ve worked hard to make it that way.”

And yet the complaints continued.

In November, Hamilton County issued a notice of violation after finding a bartender wearing a neck gaiter mask without covering his face. On Dec. 3, a woman identified in records as a “positive case” told Hamilton County’s health department “they were not practicing social distancing” when she visited the bar.

Responding to the complaint, inspectors issued no violations but recorded Weddle’s frustration: “Talked to owners son Cole who stated they haven’t had any large crowds even on the night before Thanksgiving. They feel they are doing everything possible and keep getting complaints.” 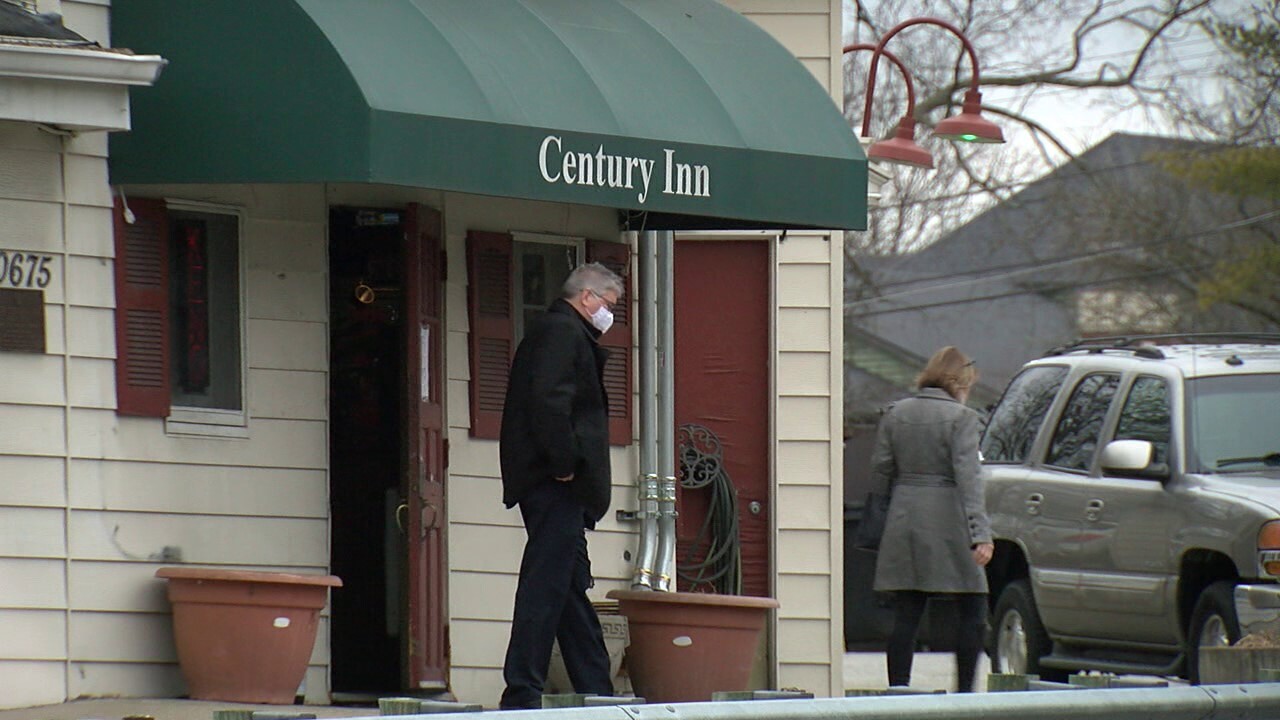 Woodlawn’s Century Inn dates back to 1806.

Century Inn at 10675 Springfield Pike in Woodlawn had 16 complaints between June 18 and Aug. 10, one of them from a customer who thought the restaurant was making light of the pandemic with signs that explained why some employees and customers weren’t wearing masks. One sign said employees without masks had “a health condition that is protected by the HIPAA law,” which guarantees patient privacy.

Another sign advised customers: “If we see you without a mask, we will assume you have a medical condition.”

“I felt their attitude was a deliberate violation of the letter and the spirit of the law,” said Graydon Gorby of Glendale.

Owner Greg Ready said some of his employees had trouble breathing while working outdoor tables in 90-degree heat.

“I didn’t want to fire them because they wouldn’t wear a mask,” he said. “But basically, that’s what ended up happening. If you can’t wear a mask, I can’t use you. I can’t get any more complaints.” 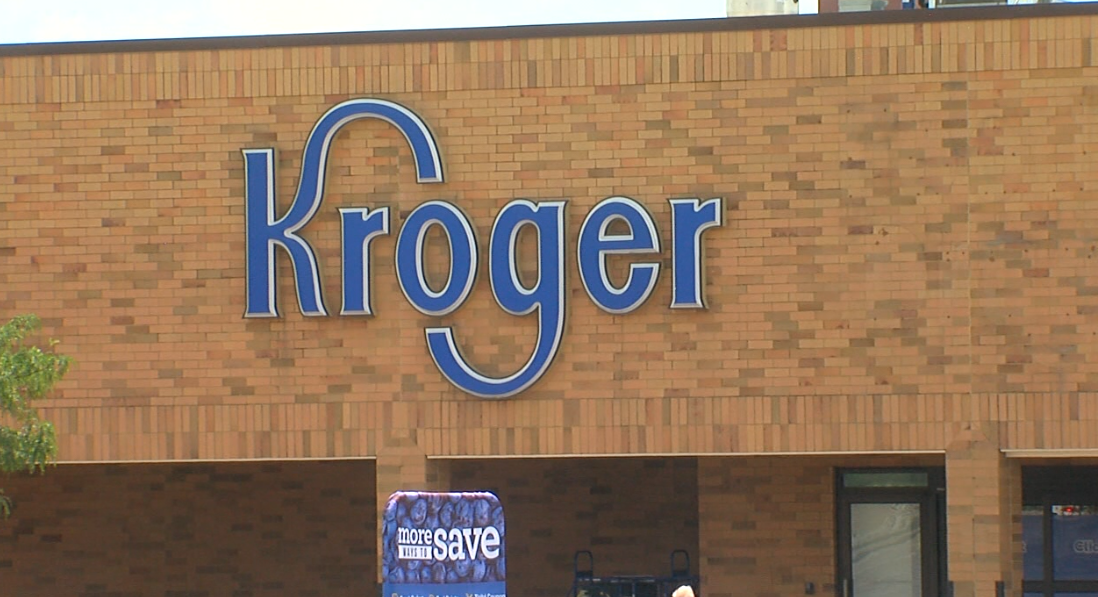 Kroger had five stores that ranked in the top 10, with a total of 95 complaints and one notice of violation between Apr. 3 and Jan. 5. The Kroger Marketplace at 2636 Springdale Road in Colerain Township was written up July 10 when an inspector noted 10-15 employees, including two managers, were wearing masks incorrectly.

Kroger did not respond to the I-Team’s questions about its complaints, but the numbers are likely related to foot traffic. Before the pandemic, Kroger estimated its stores drew an average of 4,000 customers per day. Placer.ai, which tracks retail foot traffic nationwide, said Kroger shoppers spent 7.7% more time in its stores in 2020.

Back to Silver Spring House

Joe Kendall also has a high-traffic location in his 2.5-acre restaurant property known for its chicken and its strong community roots. He built the business over three decades as the neighborhood grew around it. So, when Ohio ordered nonessential businesses to close in March, Kendall looked for ways to keep those community connections in tact.

“We did as good a job as anybody could do,” he said. “We even opened up a grocery store in here, to help people get the supplies that they needed and couldn’t get at grocery stores.”

In the months that followed, Kendall’s restaurant secured a $489,000 loan through the Paycheck Protection Program, cleared out an indoor dining room to provide more space for carry-out customers and rented a tent to seat guests in the parking lot. When Ohio allowed restaurants to re-open in May, Kendall had about 50 fewer seats, but all 375 of them were at tables six feet apart.

“We did get our sales back when they let us open for outside seating,” Kendall said, “but at additional expense. This tented area with the heat coming in, that costs us $20,000 a month.”

A busy restaurant in the middle of a pandemic was bound to attract attention. And it wasn’t long before the complaints started.

“How is Silver Spring House able to operate indoors?” said an anonymous complaint to Hamilton County Public Health May 15. “I run a restaurant neer (sic) by and I am not able to open.”

The complaint led to a cease and desist order that Kendall challenged, arguing his largest dining area was an outdoor space because of its oversized windows.

“Our garage doors open up,” Kendall said. “On our liquor license it calls that area a patio. We thought that was included in outside seating.”

Records show health inspectors still were working to bring the restaurant into compliance when Ohio made the issue moot by opening restaurants to indoor dining May 21. But that didn’t bring an end to the complaints:

“Well, I disagree with everything that was said there,” Kendall told the I-Team. “As far as the spacing goes, that’s never been an issue. We have plexiglass up at the bars to separate people and if there is a wait, we have people waiting outside.”

General Manager Derek Taulbee said 11 of the restaurants’ 134 employees have tested positive for COVID-19 since last March, but employees are instructed not to work if they have any symptoms. As for patrons, Taulbee said the restaurant uses signs and verbal reminders to enforce masking and social distance rules, but he doesn’t recall ever asking a guest to leave for refusing to comply. 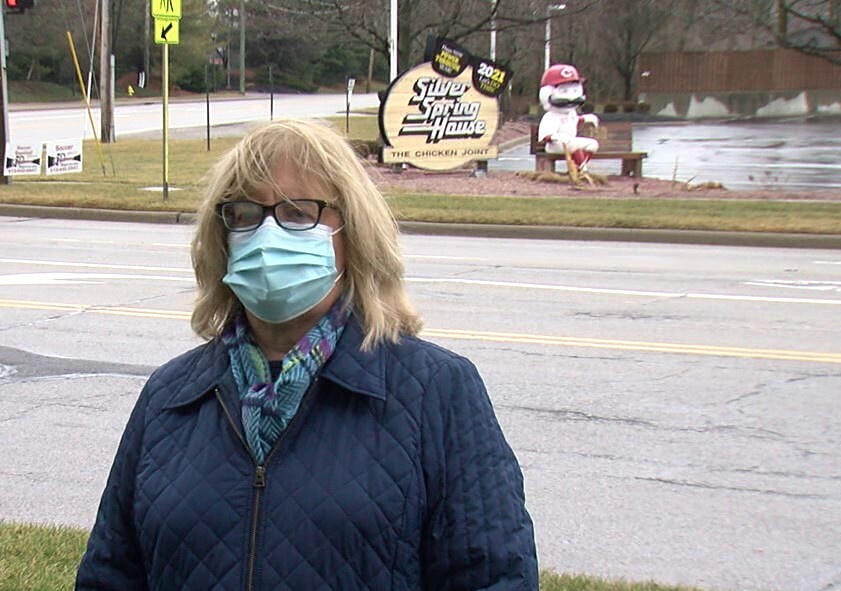 “The other restaurants and businesses are doing it. They should try a little harder,” said Patty Luken, a Symmes Township resident who hasn’t returned to Silver Spring House since September. That’s when she complained about employees not wearing masks while she picked up a carryout order.

“The virus is everywhere, and you really do have to be careful,” Luken said. “I have two granddaughters that are 3. They wear their face masks to school and daycare, and they’re not complaining. So, if a 3-year-old can do it, we all can do it.”

With Giovani Bernard gone, ought to Bengals draft a working again? – Cincinnati Bengals...