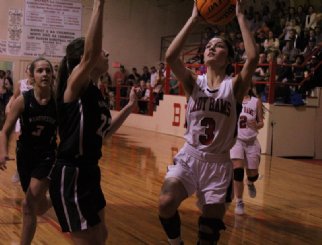 BENTON – In the group, in the middle of sudden darkness, Manchester Academy basketball coach Emily Poe and her players made a promise.

The Mavericks led the Columbus Christian Academy 26-23 just under two minutes into the second half of Saturday’s MAIS Class 2A championship game at Benton Academy, but they hadn’t played much like their dominant selves. Manchester gained up to nine points at the end of the first quarter before the Rams sneaked in and reduced the lead to three.

Then the ceiling lights in Benton’s gym went out. After the playing field was shrouded in darkness, the game stopped. Once the power was restored, the Mavs immediately knew what to do.

“When (the lights) come on again,” they said to themselves, “so will we.”

Lanie Potter buried a three from the right after a 10-minute delay and Manchester dominated the remainder of the second half to end Columbus Christian’s historic season with a 52-38 final. The Rams, who had only lost for the third time all year, had never reached the state title game before Saturday.

For the Rams and their seven-player senior class, this would not be the case. Manchester, the team that knocked Columbus Christian out of last year’s state tournament in the first round, flexed their muscles and pulled back for their 28th win of the year against just one loss.

The Mavs failed to make it to the top last year after Potter sustained an injury at the Mavs South State tournament at the end of the season, but Poe said they made it their business to win the title the following year . They did it on Saturday.

“Seeing them accomplish their goals and work really hard to get there meant the world to me,” Poe said.

The Mavs ended the third quarter on their best stretch of the night, keeping the Rams in check in defense and scoring random goals at the other end. Ivy Sowell’s theft and layup within four seconds put Manchester to 40-25 and earned the biggest cheers of the night from the huge domestic crowd who made the 12-mile journey from Yazoo City to Benton.

The Rams couldn’t significantly detract from the Mavs lead in the fourth quarter, and a 3-6 win on the line barely helped Columbus Christian. Junior Morgan Whittens belated 3-pointer to cut Manchester lead to 12 was as close as the Rams before Manchester won the league title.

But Williams praised Columbus Christian’s early fight after going past nine in the second quarter. Faith Yeates, CC DeVos and Whitten all made buckets before Cayden Harding’s right 3-pointer fell to make it a 21-20 game. Lily Barlow shared two free throws when time ran out to hold a three-point contest at halftime.

“I knew we weren’t going to play dead and lie down,” said Williams. “It’s not in our DNA.”

But after Taylor Tipton of the Rams and Karlie Martin of Manchester swapped layups early in the second half, the lights went out and the third was 6:07. Manchester held their breath, stretched their legs and soon retired for their 14-point win.

Despite the loss on Saturday, the Rams season is not over yet – they will play in the MAIS overall tournament in the coming week. And while Saturday didn’t end the way Columbus Christian wanted it to, a hugely successful 2020-21 campaign ended right where it was supposed to end.

“We wanted to be here by the end of the year,” said Williams. “We came up short. We gave everything we had.”