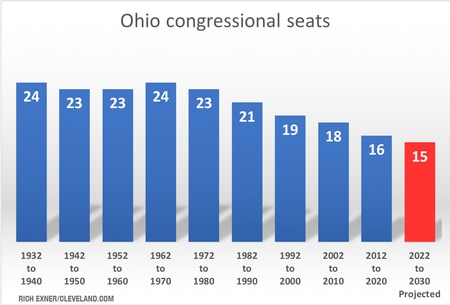 Subscribe to the Wake Up, cleveland.com’s free morning newsletter, delivered to your inbox weekdays at 5:30 a.m.

A winter storm is expected to drop a lot of snow on the region, beginning with about 4 inches today. It will be cold, too, with highs in the low 20s. The snow is expected to ramp up this evening, with an additional 5 to 9 inches overnight. Look for lows in the mid-teens. Read more.

Cleveland wards: Cleveland won’t redraw its City Council ward boundaries until 2025 as a result of an announcement Friday by the U.S. Census Bureau that the local population data needed to do the work won’t be available until as late as Sept. 30. Robert Higgs reports the council is required to draw a new ward map after every Census, but a provision in Cleveland’s charter would have required population numbers be certified by the Ohio secretary of state no later than Feb. 16.

Winter storm: Northeast Ohio residents are waking up this morning to a winter storm warning that forecasts up to 12 inches of new snow and more in some areas by Tuesday morning. Cliff Pinckard reports the heaviest snow, 5 to 9 inches, isn’t expected to start falling until tonight, but 2 to 4 inches are possible during the day today. ODOT says it will have more than 300 plows on Northeast Ohio roads around the clock during the storm.

This Week in the CLE: Unemployment scammers are upping the pace in Ohio, where the number of new claims in Ohio last week nearly tripled. Of more than 140,000 filings, 44,848 were flagged for review. We’re talking about what that means for the state and unemployed workers on This Week in the CLE, cleveland.com’s daily half-hour news podcast.

CO2: Carbon dioxide sensors can’t tell whether COVID-19 is present indoors, but they can show if a space needs fresh air and more circulation. Cameron Fields reports the more people speak and exhale, the more carbon dioxide is produced. So people are using carbon dioxide monitors to measure air quality inside.

New numbers: The Ohio Department of Health reported Sunday that the number of confirmed or probable infections of the novel coronavirus had risen to 939,350, up 1,809 since Saturday. Only six new deaths were reported Sunday, bringing the total to 16,346, Jane Morice reports. The Health Department on Friday added 2,559 more deaths to the state’s coronavirus death tally and 3,305 cases. On Saturday, the state added 2,799 cases and 1,204 deaths.

Parking bans: A few Northeast Ohio communities have begun implementing parking bans ahead of the winter storm that will hit the area today into Tuesday. Jane Morice has a list.

The number of Ohio congressional seats has dropped from 24 to a projected 15. (Rich Exner, cleveland.OM

Census: The Census Bureau announced Friday that it could be as late as Sept. 30 before it is able to provide states with the Census 2020 data necessary to draw new congressional and Statehouse district lines in preparation for the 2022 elections. Rich Exner reports the detailed local population counts normally are delivered to the states by March 31.

Vaccines in schools: Gov. Mike DeWine on Friday evening upped the pressure on Ohio schools to return to in-person classes on March 1, suggesting he would not begin teacher vaccinations at schools that don’t. Jeremy Pelzer reports that in a hastily called televised briefing, DeWine said a “handful of schools” where vaccines have been distributed, including in Akron, have indicated they will renege on the agreement to open by March 1. But DeWine said Cleveland school district CEO Eric Gordon made a commitment to him to “do everything in his power” to reopen Cleveland schools by March 1.

State health resignation: An Ohio Department of Health epidemiology investigator resigned from the job Friday, two days after the agency revealed it had found approximately 4,100 coronavirus-related deaths that had not been publicly disclosed. Laura Hancock also reports the chief of the Bureau of Infectious Diseases was reassigned to a position in the Bureau of Health Improvement and Wellness.

Impeachment: After five days of arguments on whether former President Donald Trump should be impeached for his role in a Jan. 6 riot at the U.S. Capitol, Republican Sen. Rob Portman voted to acquit Trump, while Democratic Sen. Sherrod Brown voted to convict him. Sabrina Eaton reports Portman’s statement: “The question I must answer is not whether President Trump said and did things that were reckless and encouraged the mob. I believe that happened. The threshold question I must answer is whether a former president can be convicted by the Senate in the context of an impeachment.”

Future Cleveland: Cleveland Mayor Frank Jackson’s administration is partnering with the Cleveland chapter of the national Urban Land Institute on “Building the 21st Century City: The Future Is Now!,’’ an online symposium in March that could help guide a new citywide comprehensive plan for everything from neighborhoods to waterfronts and infrastructure. Steven Litt reports Jackson is considering modifying the elevated section of the Ohio 2 Shoreway, which descends from the east end of the Main Avenue Bridge at West Ninth Street to just east of West Third Street south of FirstEnergy Stadium.

Bridgeworks: The architects and developers of the Bridgeworks apartment and hotel complex proposed for a high-visibility site at the western end of the Detroit Superior Bridge in Ohio City have considerably revamped their design in response to feedback from the city’s Landmarks Commission. Steven Litt reports the developer pushed the main bulk of the complex more than 100 feet back from the curb at West 25th Street and raised the building from 10 to 17 stories in height, which would make it 30 feet taller than the next highest building in the area, a tower at Lakeview Estates.

55 Public Square: A federal judge gave her blessing to the sale of a downtown Cleveland tower by a company with Ukrainian ties under investigation by the FBI for possible money laundering. Eric Heisig reports the Miami-based Optima Ventures completed the sale of 55 Public Square to the K&D Group for $17 million, with plans to renovate the building, turning the bottom half into 160 apartments and making improvements in a project estimated to cost $80 million.

Vitamin C: Treating coronavirus patients with vitamin C and zinc does not reduce the severity or duration of their symptoms, Cleveland Clinic researchers determined in a new study. Evan MacDonald reports the study is the first to test the effectiveness of using zinc and vitamin C to treat COVID-19.

Vaccine question: You’ve just had a dose of the COVID-19 vaccine and you’re suddenly experiencing side-effects like fever, fatigue and muscle aches. Are you contagious? Evan MacDonald reports the short answer is no.

Timeline: Marc Bona rounds up coronavirus facts, figures and numbers for Feb. 6-12, from the Super Bowl to the Australian Open.

Coping through COVID: Distance learning during the pandemic created hurdles for all students, but learning in the era of COVID-19 posed additional challenges for students with special needs, reports Olivia Mitchell. Administrators at the Positive Education Program, a non-profit that provides services to public school children with mental health and behavioral health issues, say that remote learning is not ideal for many children with mental health, developmental, communication and sensory needs.

Bar patrol: The lifting of Ohio’s curfew will have little effect on the Ohio Investigative Unit agents who patrol bars and restaurants for potential violations, reports Marc Bona. Fewer than 70 enforcement agents canvas the state’s bars and restaurants, and since the beginning of the pandemic, agents have made 28,793 visits and issued 362 administrative citations.

Bar cited: An Eastlake lounge was cited for a third time by the Ohio Investigative Unit for violating health orders put in place to try and curb the spread of the novel coronavirus. Vybez Lounge received two citations on its liquor permit at the end of December 2020. It was cited again about 12:10 a.m. Sunday, Jane Morice reports.

Jail stomping: A Cuyahoga County Jail officer pleaded guilty to two misdemeanor charges in connection with an incident in which he stomped on an inmate’s arm. Adam Ferrise reports Jermaine Clements, 39, pleaded guilty on Feb. 2 to assault and dereliction of duty. He will remain a corrections officer and will not face additional suspension because of his guilty plea.

UA land: The University of Akron has announced it intends to sell, lease or repurpose up to 1 million square feet of space, mostly on the periphery of its campus, as a result of enrollment and budget issues. That could include space in the downtown Polsky Building, of which UA currently uses about 70%, Robin Goist reports.

Tax filing: The IRS launched tax filing season Friday with a plea for people to file electronically, especially this year because of ongoing mail delays and pandemic-related processing changes. Rich Exner reports the IRS expects to issue refunds for most electronic returns within 21 days, but could not offer an estimate for how long it will take for paper forms.

Medical marijuana: State officials are accepting written public comments on six ailments that could potentially get added to the qualifying conditions list for medical marijuana. Laura Hancock reports the State Medical Board of Ohio will accept emails through Feb. 26 on autism, Huntington’s disease, panic disorder with agoraphobia, restless leg syndrome, spasticity and spasms and terminal illness.

Bald eagles: Two bald eagles, who have returned to the Pinery Narrows area of the Cuyahoga Valley National Park for more than a decade, have come back again and appear to be actively tending a nest. The area around the tree where the nest is located will be closed today through July 31 as to not disturb the eagles or their eggs, Jane Morice reports.

CPL reopens: Cleveland Public Library is re-opening for in-person browsing Feb. 22, and it’s including new services such as books by mail and free meals for children and families. Cameron Fields reports the city’s public libraries have been closed for in-person browsing since November, when COVID-19 cases began spiking.

Orchids: Cleveland Botanical Garden presents Orchids Forever, with warmth and color of one of the world’s most beautiful flowering plants. John Kuntz has photos of the exhibit, which runs through April 11.

President’s Day: Sales are a President’s Day tradition. You’ll find deals on mattresses, hiking gear, furniture, clothing and more — with free shipping often included as a part of the package.

‘Bring Film Home’: That is the theme for the 45th annual Cleveland International Film Festival, which is being held virtually for the second straight year. Joey Morona reports the logo for the festival, known as CIFF45 Streams, depicts movie marquees attached to people’s houses and apartment buildings.

Valentine’s ‘I Do’: Fifteen lucky couples tied the knot on Valentine’s Day at the third annual Say “I Do” event inside the Market Place at Crocker Park on Sunday. David Petkiewicz has photos of the event.

Flavortown: Food Network star Guy Fieri recently launched Guy Fieri’s Flavortown Kitchens, a delivery-only restaurant that operates out of ghost kitchens in 23 states, including in Greater Cleveland. Joey Morona reports that when you order Fieri’s monster Mac N Cheese Burger, out-of-bounds Jalapeno Pig Poppers or a Crazy Cuban Sandwich, the food is actually being prepared in the kitchens at Buca di Beppo restaurants in Strongsville and Westlake, or the Bravo! Italian Kitchen in Canton.

House of the Week: Built in 1900, the colonial revival-style house at 349 Aurora St. was one of the first structures outside Hudson’s historic district to receive historic landmark status by City Council in 2002. Joey Morona reports the home, originally used as a summer house for a Cleveland family, recently hit the market with the asking price of $1.75 million.

Cleveland police search for missing 2-year-old girl, who may be with her father Read more

One dead, two hurt in Cleveland shooting after argument between man and his aunt’s boyfriend Read more